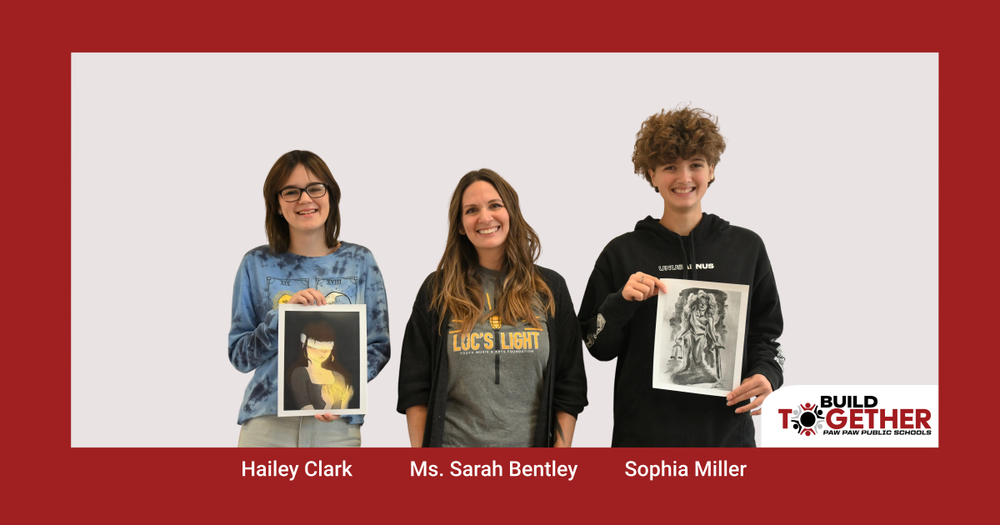 Paw Paw, MI – During the month of September, Van Buren County Courts held an Art Contest for all Van Buren County High School students. The theme of the contest was “Blind Justice”. According to the courts, this expression means that justice is impartial and objective.

In a recent announcement from the Van Buren County Courts, the 1st and 2nd place winners in the contest were two students from Paw Paw High School.

Winning first place in the “Blind Justice” Art Contest was Sophia Miller, an 11th grade art student at Paw Paw High School working under the instruction of Sarah Bentley. In recognition of her 1st place submission, Sophia’s artwork will be displayed in the Van Buren County Courthouse for a period of no less than a year listing her name as the artist. She will also receive a $200 gift card and an honorary plaque.

When asked what inspired her work, Sophia said, “I looked at the statues of the Blind Justice Lady, and I knew I wanted to do something striking and dramatic.” As her medium, Sophia chose watercolors.

The 2nd place winner of the Art Contest was Hailey Clark, a 9th grade student at Paw Paw High School. Hailey’s artwork will also be displayed in the courthouse, listing her name as the artist, along with a gift card to Biggby Coffee.

In Hailey’s case, she heard about the contest through the announcements at school and decided to enter. This was her first competition, and she chose digital art as her medium.